Last September we have manufactured and assembled 91 portable offices in two floors with 36 stairways for Iberdrola at the Cofrentes Nuclear Power Plant.

Being operational for 33 years, the Cofrentes Nuclear Power Plant is the main centre of electrical production in the Region of Valencia. During 2016, the nuclear plant generated 9.540 millions of kWh, which represents close to 3.6% of the national electrical production. This production fulfils the 37% of the annual electrical demand of the Region of Valencia. Likewise, with 1092.02 Mw, Cofrentes is the Spanish nuclear power plant with greatest installed electric power. 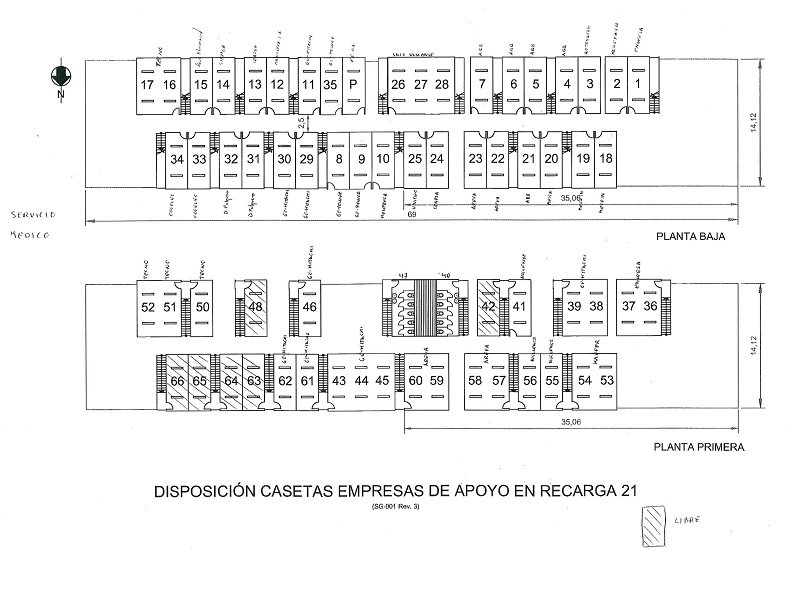 The project consists of temporary transferring the offices of the Nuclear power plant for the scheduled stoppage that will take place in September 2017.

The prefabricated modules serve as support for both the personnel staff of the Iberdrola Nuclear Power Plant and its different suppliers who are going to work at the plant stoppage. Among them, there are companies with high technical level; such as Ge-Power, Tecnaton, Ge-Hitachi, ABB, Siemens, Duro Felguera, Cegelec, Empresarios Agrupados, Areva…

This is therefore one more challenge in our trajectory as it is a highly complex work in highly complex ambiance. We appreciate the trust placed in Europa Prefabri.

Why is there a shutdown in Cofrentes nuclear power station? 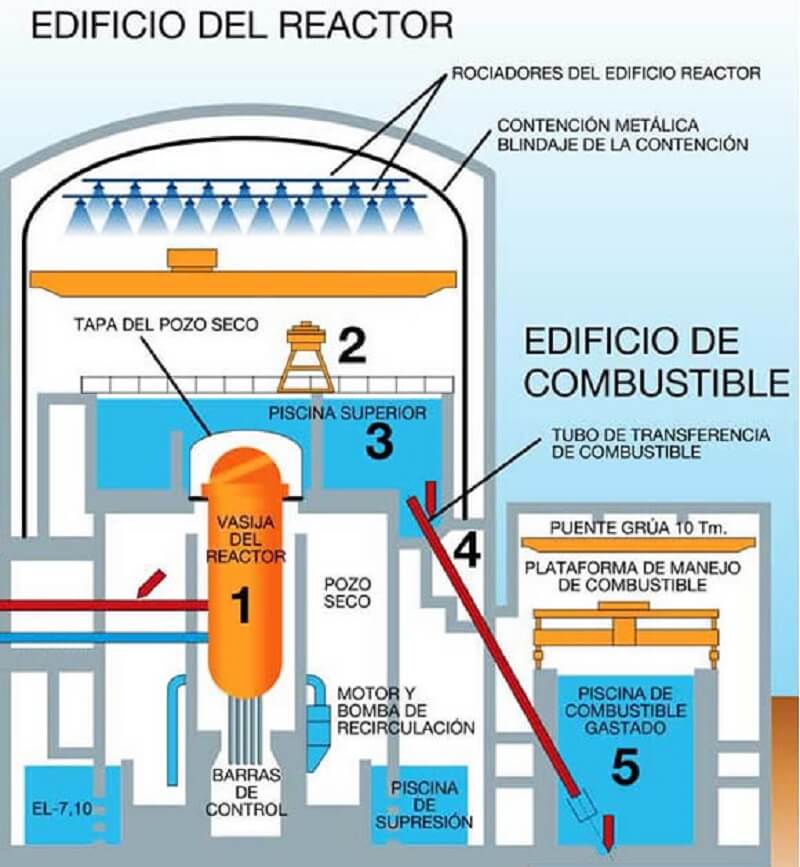 The Cofrentes Nuclear Power Plant makes a biannual shutdown to recharge the fuel and replace part of it in order to guarantee its future operation.

Likewise, fuel-refuelling shutdowns are a good occasion for carrying out multiple maintenance works and equipment reviewing that cannot be inspected when the power station is active; as well as design modifications aimed at the technological optimisation of plant equipment and components.

Each recharge must be studied and planned in detail.  This way, its duration, the number of activities to be carried out, and the hiring of technical staff necessary for the execution of the works can be foreseen. 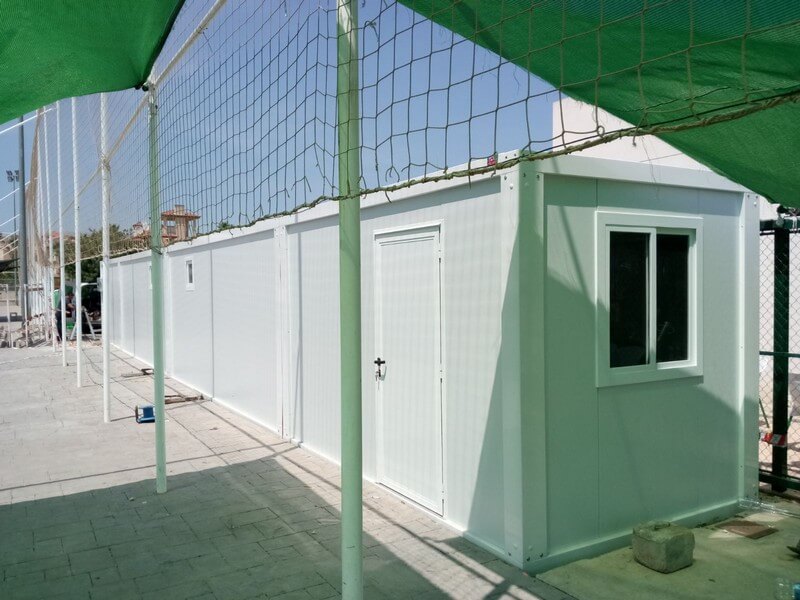 The rest of the space is diaphanous; in order to set benches to equip the dressing room, also with lockers and other required furniture.

Technical features of the Project: prefabricated modular dressing room building for a football field at Alicante 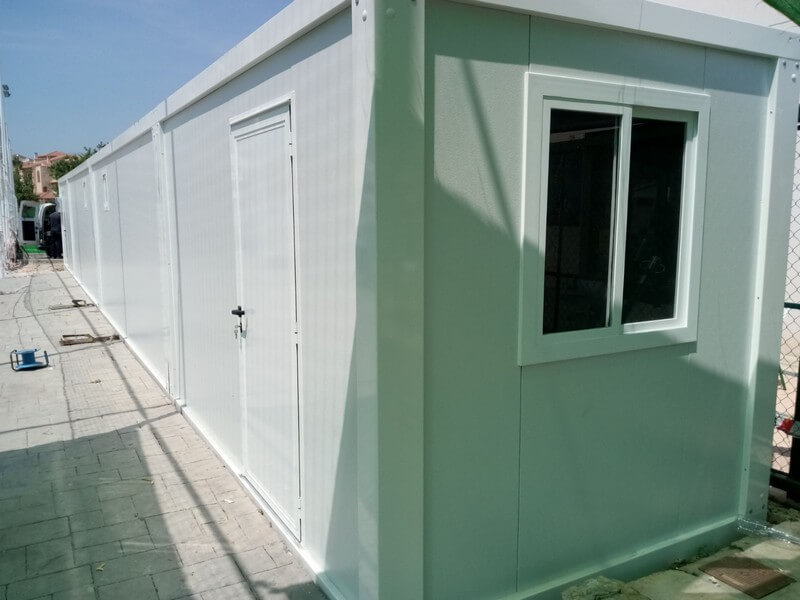 As the floor structure, the roof structure is formed by two longitudinal beams, and two transversally of same section, shaped in cold in galvanized sheet. The roof structure supports a trapezoidal sheet.

The evacuation of pluvial water is realised thanks to two PVC gutters, integrated in the shorts beams of the roof.

The columns are formed by cold-galvanized sheet profiles. These columns are screwed to the floor and the roof by special screws. By the interior of the column is fixed the soil pipe formed by a round PVC tube. The end of the columns inside the module is finished by a lacquered sheet that can be used in order to fasten the electrical mechanisms, sockets, switches and electric protection frame.

The false ceiling is formed by galvanized metallic sheets, pre-lacquered in white silicon polyester. In between the false ceiling and the roof plaque, an insulating plate of fibreglass with vapour barrier is placed. The internal height of the module is 2.275m.

The carpentry is made of PVC and/or white lacquered aluminum profiles. This carpentry counts on the following elements:

It is considered finished except for the power line up to the module’s location.

All the electrical connections and their facilities are adapted to the low tension regulation. At the inlet of the connection, a protection and control panel with independent magneto-thermal protections and the needed differentials for illumination, urgency light (in its case), acclimatization and different uses will be assembled.  It will also count with protection elements for direct contacts, over loadings and short-circuits.

This electrical installation is composed of:

The sanitary installation is considered complete (with the exception of water arrival to the module, and the drainage of waste water to the septic tank, which will be for the customer account). The sanitary material will be of white colour, ROCA brand or similar.

The sanitary facilities are formed by the plumbing with polyethylene tubes. The plumbing is formed by pipes and fittings in rigid PVC, with the corresponding hydraulic siphons.  The unions are materialized with specific adhesive PVC to ensure a complete seal.

This equipment counts with:

The modular prefabricated dressing rooms are the perfect complement for any sports facilities: 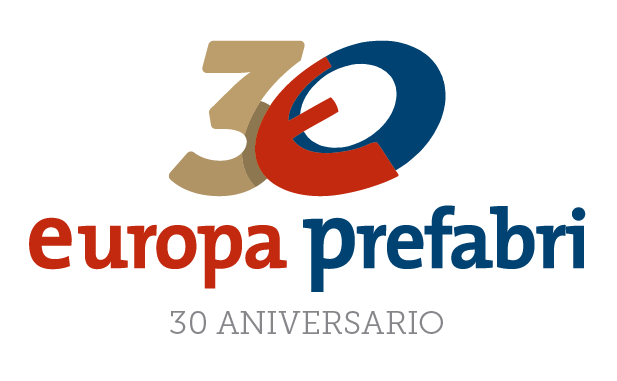 We are happy to share with our customers and friends the 30 anniversary of Europa Prefabri Group. We have now 30 years of experience in modular and prefabricated construction. During these years we have lived many good and hard times, we have accomplished thousands of projects, we have adapted to the new times our products as well as the organization of our enterprise.

Nevertheless, the most important thing is that we are taking care of our customers with the same enthusiasm.

We would like to express our gratitude to all our partners, customers, workers and friends, because they are the ones who made possible that we have been working for 30 years and that we will keep on working for many years more.

We include some pictures of our prefabricated shelters installed in the Feria de Málaga 2016 (Mágala’s Fair). We have provided more than 50 modules for different uses at the Fairground Cortijo de Torres (next to the Congress Hall of Málaga), which is the neuralgic center for events.

The Feria de Málaga is also known as the «Fair of the South of Europe».

Europa Prefabri continues being the leader enterprise within the sector of modular construction and portacabins at Málaga. 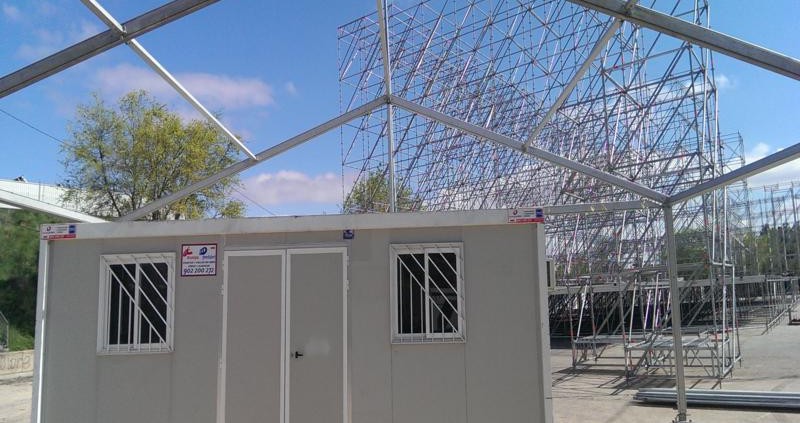 The organizers of the Spanish festival Viñarock trusted us one more year for the supplying of more than 50 prefabricated modules for different uses (production, offices, stands, infirmaries…). Those modules are necessary for the organization of one of the most important festivals in Spain.

Every year, companies of organization of events choose EUROPA PREFABRI to rent prefabricated stands for big events which are coming with the beginning of summer. Indeed, we have been professional and effective in logistic for more than 20 years.

Here you can see several photos of the assembly of those stands. 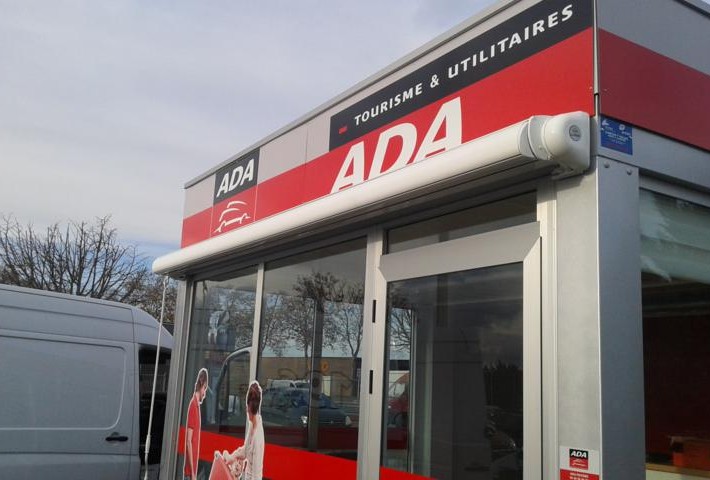 Our modular constructions are particulary recommended for all kind of companies that need a workspace, both temporary and permanent, installed in a short period of time and paying special attention to design besides safety and quality of materials. Our modular constructions are fully customized and the client could choose between a wide range of variety in materials and different levels of accessorization depending on the use.

Here we offer an example of special modules manufactured for an important car rental company we are installing in different cities of France. In this case, our client has selected special panels and structure painted in corporate colors, as well as additional elements (air conditioning, furniture, glazing…) that we also offer to give a complete service so our clients do not have to worry about anything.

This company decided to use our prefabricated structures in all their new headquarters in France, considering the advantage that it is not necessary to anchored to the floor, which is relevant because most of the constructions are located in airport and stations car parks.  We plan the production and assembly of more than 50 modules in the coming months.

For the last few months we supplied 10 containers with flat pack modules to our distributor in Peru.

During january cabins have been assembled in the company’s plant near Lima.

There are now  being rented to differnt companies in this country. 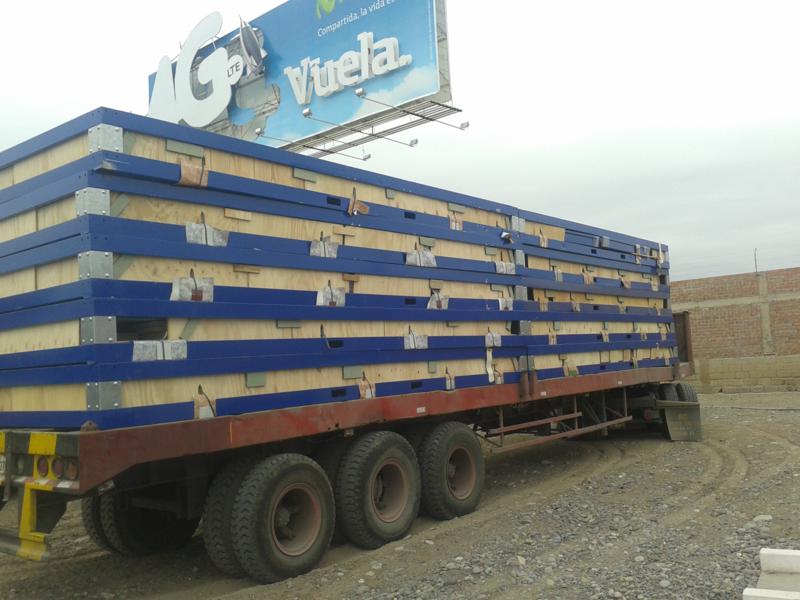 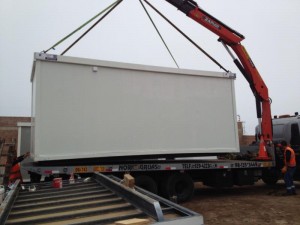 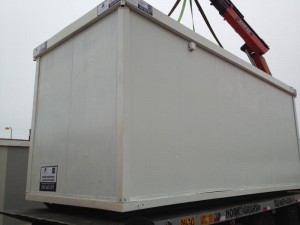 Last month we have assembled these modular offices in Senegal. Our client is one of most important french contruction companies who is developing some projects in the country and they will use our portacabin as temporary offices.

Prefabricated cabins have been sent as flat pack inside to marine containers and we have done the assembly with some of our technicians.

You can see some pictures about the assembly at Senegal. 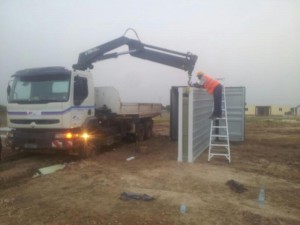 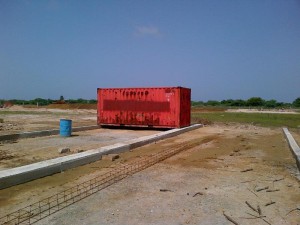 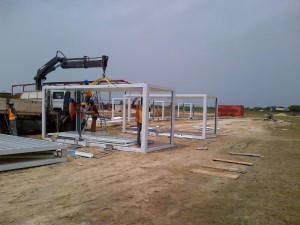 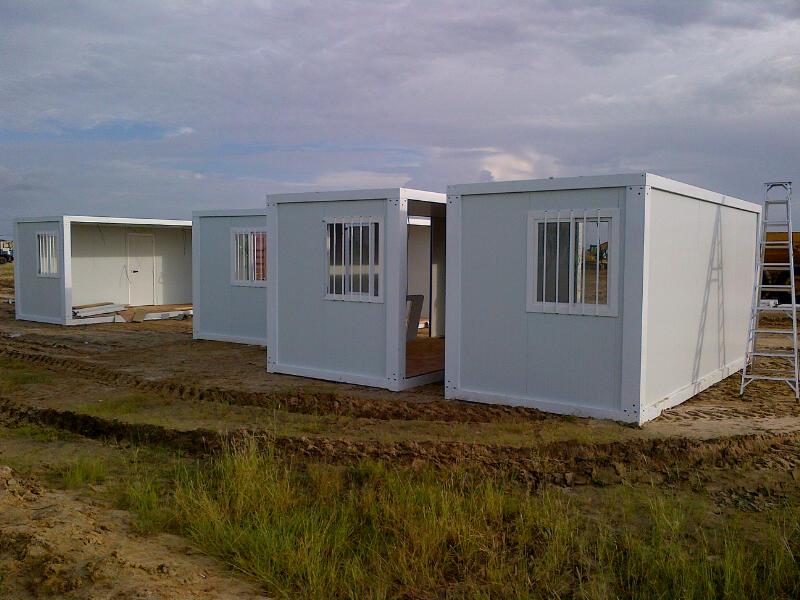 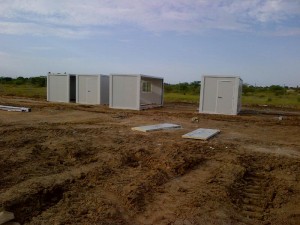