Europa Prefabri Group contributed to the celebration of the World Pride 2017 by renting prefabricated modules to SAMUR, the emergency sanitary attention service of the council of Madrid.

Our prefabricated modules received 445 people. The main part of the incidents were traumas, falls, faintnesses, sprains and alcoholic coma, even thought the latter was not reported that much.

Technical features and delivery places for prefabricated modules for  SAMUR 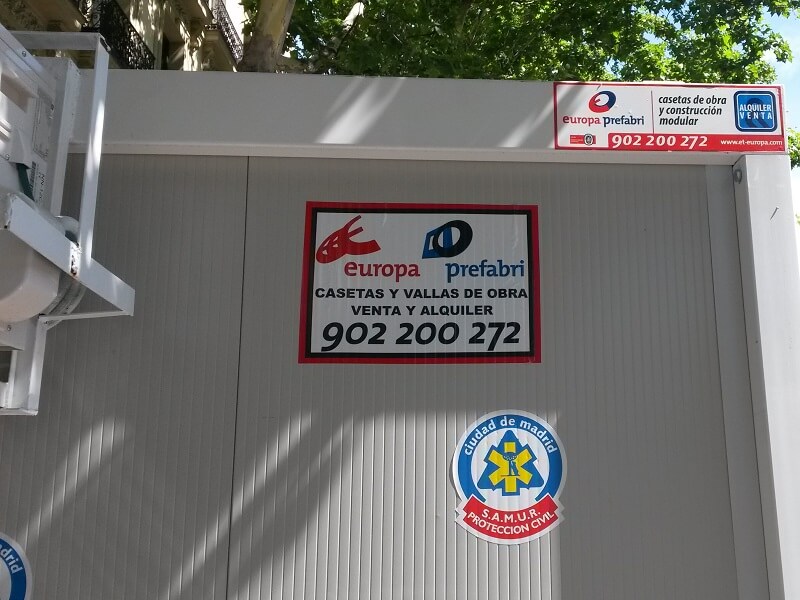 The modular assembly was delivered in Puerta de Alcalá, near to the stage where you could find artists like OBK, Marta Sánchez, Rosa López, Conchita Wurtz, Ana Torroja or Carlinhos Brown.

The modular assembly was diaphanous, with a space of 18 x 2,40 metres.

We delivered a modular assembly in Puerta del Sol with 3 diaphanous modules, with a total interior space of 6 x 7,2 metres.

Prefabricated modules for SAMUR in Barquillo

We delivered in Barquillo a modular assembly made of 2 modules of 12 x 2,40 metres, united on the side.

Very close from Plaza del Rey, the competition of Factor Orgullo took place with many other artistic representations.

Prefabricated modules for SAMUR in Infantas

We delivered a modular assembly made of two modules of 12 x 2,40 metres, united on the side.

This location was just next to the Plaza Pedro Zerolo, where the World Pride speech was delivered and also the prize-giving. Artists like Nuria Fergó, la Húngara, Camela were there.

We delivered a diaphanous prefabricated module in Puente del Rey of 6×2,40 metres in a zone reserved for Samur-PC.

The council of Madrid was very well-organized thanks to a huge prevention and security device in order to enable all the protagonists to enjoy this event.

This way, SAMUR showed once again its know-how and caution by acting in a really professional way since 1989, thanks to Counsellor for Healthcare and Consumption of the council of Madrid, M. Simón Viñals, under the mandate of mayor Agustín Rodríguez Sahagún.

Europa Prefabri Group, with more than 30 years of experience in modular construction, is glad to have had the opportunity to contribute to the organisation of this event that, every year, is becoming more and more a symbol of the city and shows the open-minded and supportive behaviour of Spanish people.